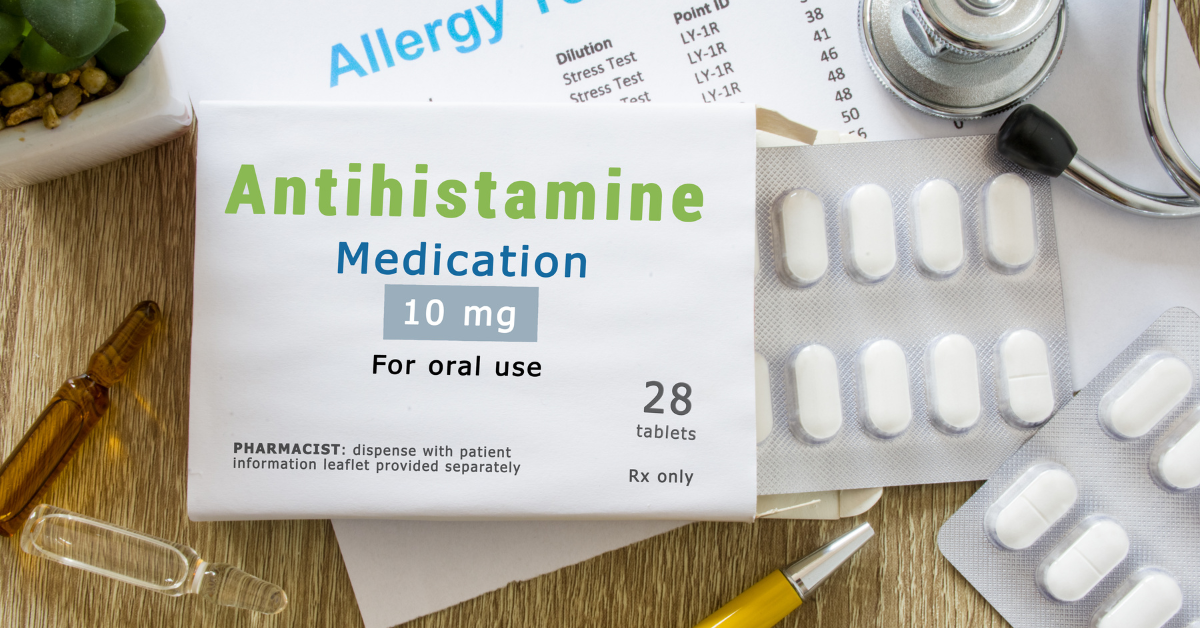 Over the past few weeks, we have explored the efficacy and the side effects of medications commonly used to treat anxiety disorders. In our previous articles, we have looked at benzodiazepines, Selective Serotonin Re-uptake Inhibitors (SSRIs), beta-blockers, and buspirone.

Do you mean the stuff I take for my allergies, or for when I have severe nasal congestion from a cold?

But before you reach for the Zyrtec ( which you shouldn’t do without speaking to your doctor first anyway), let’s take a look at this a little more. When it comes to helping to relieve anxiety symptoms, not all antihistamines are created equal.

First of all, what is an antihistamine?

Good question, but to understand what an antihistamine is, we first need to look at what exactly is histamine.

Histamine is a chemical created by the immune system that plays a role in various bodily processes. It dilates blood vessels, affects muscle contractions in the lungs and intestines, and stimulates gastric acid secretion. Histamine also helps fluid to move through blood vessel walls, affects heart rate, and it helps to transmit chemical messages between nerve cells.

Though histamine is necessary for the body to function properly, when the body encounters a threat from an allergen such as pollen, ragweed, mold, etc, the body can overproduce histamine. This overproduction of histamine can cause an inflammatory response along with a slew of allergy symptoms such as:

Antihistamines work by blocking the histamine’s chemical signals that cause this inflammatory response.

Many antihistamines are available over the counter, however, there is only one antihistamine that is approved to help reduce anxiety symptoms, which is the prescription antihistamine medication, hydroxyzine.

Hydroxyzine, also known by its brand name Vistaril, is an antihistamine that not only works on blocking histamine but also serves as a serotonin antagonist. This means, similar to SSRIs, it is able to boost the amount of serotonin in the brain by blocking it from being reabsorbed.

By increasing serotonin and decreasing histamine, hydroxyzine can reduce anxiety and help create a sense of calmness and increased feelings of well-being.

Let’s take a look at what the research says about the use of hydroxyzine in the treatment of anxiety.

In 2002, a 3-month long study looked at the effect of hydroxyzine on 369 patients diagnosed with anxiety. The results showed that hydroxyzine was safe and effective in the treatment of Generalized Anxiety Disorder, and concluded that it appears to be an effective alternative treatment to benzodiazepine prescription.

Another study of 130 patients with generalized anxiety disorder found that a dose of 50 mg of hydroxyzine a day could produce “a statistically and clinically significant anxiolytic ( anti-anxiety) effect”.

Numerous case studies have also shown that hydroxyzine can be successful in helping to relieve the symptoms of panic attacks.

One of the benefits of using antihistamine hydroxyzine for short-term treatment of anxiety is that it works quickly, and can be taken as needed, rather than daily. Hydroxyzine will usually begin to decrease anxiety within 30 minutes and will typically reach its maximum effects at around 2 hours after ingestion.

While it’s great that hydroxyzine works quickly, its potential side effects can come on quickly as well.

Though most side effects are mild and will likely lessen as the body gets used to the medication, they can be challenging to adjust to.

In our next article, we will take a look at some of the side effects and risks associated with using hydroxyzine to treat generalized anxiety disorder.