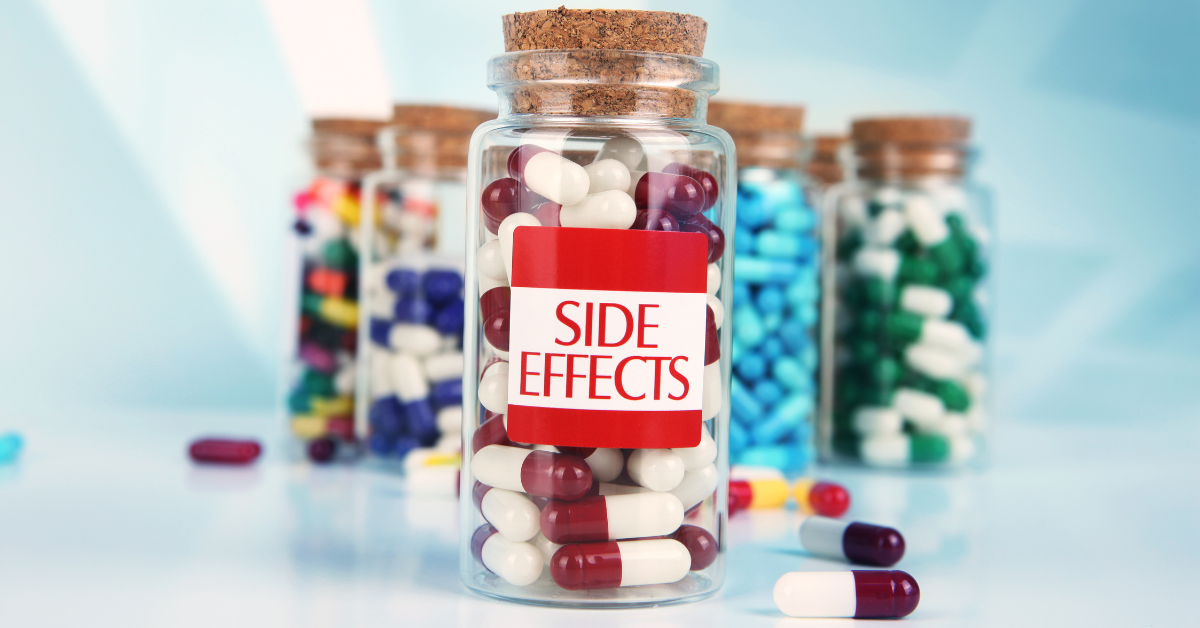 SSRIs and SNRIs: Potential Side Effects

As we continue our series on medications used to treat anxiety disorders, today we will take a look at the side effect profiles of both SSRIs and SNRIs.

The main difference between these two classes of medication is that SSRIs affect only serotonin levels, while SNRIs affect serotonin and norepinephrine levels.

As Selective Serotonin Reuptake Inhibitors, SSRIs work by helping to stop the brain from reabsorbing serotonin- a chemical messenger in the brain that helps to transmit certain emotions.

Symptoms of low serotonin can be associated with many health conditions including:

When a serotonin deficiency is suspected, the first line of treatment usually includes an SSRI. These medications work by interrupting the reabsorption or reuptake process of serotonin, thereby making more serotonin available in the brain. As a result, SSRIs can have a calming effect on the mood and minimize the experience of anxiety symptoms.

The most common SSRIs used for this purpose are:

Though SSRIs are usually the first line of treatment for anxiety and depression, some patients may find that SNRIs work better for them and their particular mental health issues.

SNRIs are Selective Norepinephrine Reuptake Inhibitors, which, similar to SSRIs, stop the reabsorption of serotonin. However, unlike SSRIs, SNRIs also inhibit the reuptake of norepinephrine, which is a neurotransmitter that plays a role in the body’s response to stress.

Norepinephrine also helps to regulate sleep, memory, mood, and even blood pressure. However, when the body’s norepinephrine levels are either too high or too low, all of these areas can be adversely affected.

Health conditions associated with low levels of norepinephrine include:

If a serotonin and norepinephrine imbalance is believed to be contributing to anxiety symptoms, the most commonly prescribed SNRIs in the treatment of anxiety are:

Both SSRIs and SNRIs are intended to correct a chemical imbalance in the brain. However, sometimes they can cause an increase in their selective neurotransmitters which can be problematic. Usually, this is related to either too high of a dosage or a result of a combination of medications that should not be taken together.

Too much serotonin in the brain can cause everything from confusion to hallucinations, fever, nausea, vomiting, diarrhea, seizures, and even coma. An overdose of serotonin can also cause serotonin syndrome, which can cause these side effects, and, can also be life-threatening. So it is important to note that if you or someone you love is experiencing the symptoms of serotonin syndrome, it is critical to seek medical attention immediately.

As for norepinephrine levels, if they are too high, this can cause an increase in anxiety, irritability, and agitation. It can also cause panic attacks, sweating, tremors, rapid heartbeat, nightmares, and hyperarousal. And, in cases of extreme doses of norepinephrine, there is a risk of heart, blood vessel, and kidney damage.

Fortunately, most people do not experience medication-induced too high or too low serotonin or norepinephrine levels at these extremes, however, that is not to say they don’t experience some of these symptoms as side effects while adjusting to the medication.

The most common side effects associated with both SSRIs and SNRIs are usually mild and present during the first few weeks of treatment.

The most common side effects are:

If any of these side effects are particularly troublesome, it could be a sign that the dosage is too high, too low, or that the medication just isn’t the right fit, and another medication should be administered.

Though SNRIs and SSRIs do share several of the same common side effects, there is some evidence to suggest that side effects are more likely to be experienced with SNRIs.

SNRIs can also cause additional side effects such as:

SSRIs and SNRIs take time to adjust to, and many of the initial side effects are temporary. In fact, it is quite common to experience an increase in anxiety during the first week or two of treatment. If this anxiety is too much, oftentimes physicians can prescribe something to help with the adjustment period, like an antihistamine, or in some cases a benzodiazepine.

Ultimately when it comes down to finding the right medication for a particular case of anxiety and/or depression, it really is about working with your doctor to find the treatment that is best for you. To find out if you can benefit from an SSRI or an SNRI, please our office and set up an appointment today.